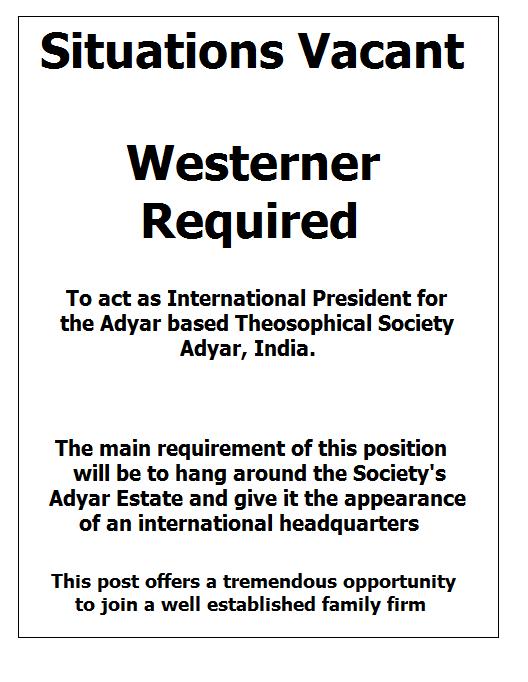 The latest development in Adyar's cynical use of the Theosophical Society to keep itself going is that it now wants to hire a Westerner as international president in order to con the authorities into believing that Adyar is the headquarters of an international organisation, so they won't knock it down.

After years of sucking the life out of the Theosophical Society to feed their own agenda, the Adyar controllers are apparently worried because the Adyar Estate is threatened with the enforcement of a compulsory land acquisition order. This threat is not new and has been around for years. Under the Indian system it seems that this order will not be enforced if Adyar can demonstrate that it is the headquarters of an international organisation. If this is the case then it is strange that the order hasn’t been enforced already.

The 2014 presidential election looks like changing from a struggle over the control of Adyar to a diplomatic exercise by the Adyar controllers to save Adyar and an opportunity to strengthen Adyar's position when it comes to draining resources and energy from the Society. This comes at a time when the Society is likely to break up and there has been talk of moving the headquarters to another country, with Wheaton (USA) sometimes mentioned. If news of the land acquisition threat is accurate then a non-Indian international president would be unable to move the headquarters from Adyar and would almost certainly need to reside there.

Although the land acquisition threat has been around for some years, the Adyar controllers have sat on it and kept it from the general membership. It seems timely that this news should surface just after an election is announced and it could be seen as a desperate ploy by the Adyar controllers to preserve Adyar and the privileges that go with it. The precise details of this land acquisition threat should be given to all voting members. 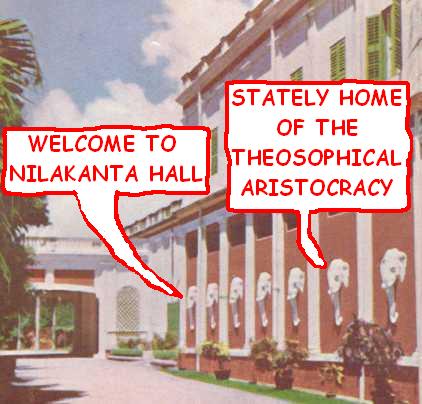 The fact that the Adyar controllers now want a Westerner as president to convince the authorities that Adyar is the headquarters of an international organisation clearly demonstrates that Adyar no longer functions as such a headquarters. If the authorities have rumbled Adyar as functioning only as a stately home for the Theosophical elite and not an international headquarters then it is about time the Theosophical Society realised this also.