This is only an idea for consideration but if the

with the current levels of indifference and

contempt for the duration of this election then

the Adyar Theosophical Society will be an

empty shell by the time it is completed. 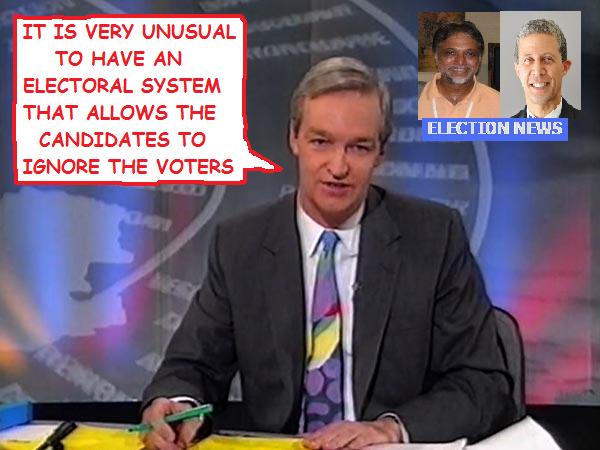 Adyar Theosophical Society members don’t trust their leadership or the election process for the international president. The election system is so restrictive and shrouded in secrecy that it can only be regarded as method of limiting power within the Society to a small elite inner circle.

I advocate the establishment of an International Election Protocol for the Adyar Theosophical Society which guarantees certain standards to protect the rights of all eligible voting members in elections for the international president. I have listed some suggestions, which are hardly cutting edge, and would be found in most modern democratic processes. No reasonable democratic organisation could object in principle to these proposals, and failure to consider any reforms such as these clearly indicates that the Theosophical aristocracy are totally resistant to any participation in the running of the Society by the general membership.

I suggest the following;

·      A standard election operating procedure, known as the International Election Protocol is drawn up and adopted to ensure the basic democratic rights of eligible voters in elections for the post of International President. A copy of the Protocol would be issued to all voters at the start of an election process and would contain the proposals outlined below.

·      To dispense with the nomination system, which is seen by many as a vetting system operated by the ruling elite to select only candidates acceptable to them. I suggest that the best way to ensure confidence is a system whereby the winning candidate must get 50% of the poll and if no candidate achieves this then a second ballot is held between the two leading candidates.

·      The right of all current members with 5 years continuous membership to stand for election. This includes unattached members in which case there is no other requirement beyond five years membership but Lodge member candidates must have five supporting signatures of any members of 5 years standing who are not also candidates. In the case of queries over unattached status for unattached members who have been Lodge members, the last 2 years as unattached status is required as part of a total 5 years membership. Prospective candidates would be given the pre-election list of those standing with the opportunity to withdraw before going on the ballot paper.

·      All candidates must be contactable by members during the election period and if they do not reply to queries then the enquirers can draw their own conclusions.

·      Candidates have the right to reply to questions from members and discuss issues.

·      Candidates have the right to distribute a manifesto if they have one.

·      Candidates may criticise the policies of other candidates.

·      A candidate must declare any family relationship to a previous international president.

·      A candidate must declare any relatives currently in paid and unpaid positions within the Society anywhere in the world. This need not include relatives who are members with no current official post.

·      Any intention to move the international seat of administration to a location other than Adyar for the duration of presidential tenure must be stated publicly at the start of the election process. Any move cannot later be undertaken without re-election.

·      Any intention to move the international headquarters to a location other than Adyar for the duration of presidential tenure must be publicly stated at the start of the election process. Any move cannot later be undertaken without re-election.

·      The electoral committee must be contactable by voters at all times throughout the election period.

·      All voters must receive a copy of the election procedure/ International Election Protocol at the start of the election period and certainly before any deadline for declaring candidacy.

·      The copy of the election procedure must include a job description for the role of international president.

·      The opening of ballot packages and counting should be filmed with commentary.

I’m sure the ruling elite will immediately reject these proposals and anything similar, and will continue to lead the Society down the road to total extinction or break up. The crunch may come pretty soon as the members are unlikely to continue to accept way they are being treated for much longer. Are the ruling elite incapable of listening?

I repeat that this proposal is only an idea for consideration and a pointer for further proposals. I’m sure there are plenty of Theosophists who can come up with something better.