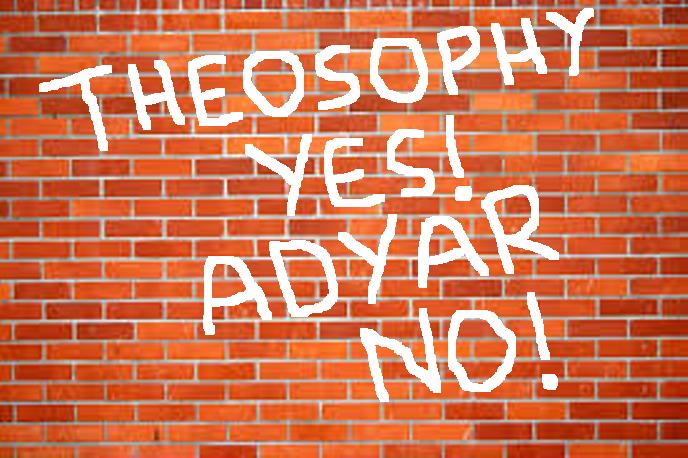 but the ruling elite either hasn’t seen it or doesn’t understand it.

Of Adyar and the failing plan I sing, the end they await

In the place where Radha’s family congregate

Long gone, members beyond the sea that they ignore

And so the downfall its course will run

The leaders and their realm destroyed as Adyar’s done

Deprived of sure succession in the family line

And so a new order for Theosophy will come

As to new glories, Theosophists will bang the drum

It’s time to start banging the drum for a new Theosophical era and a revitalised Theosophical Movement to take Theosophy forward. There are plenty of existing groups with great energy and enthusiasm ready to put their efforts into promoting Theosophy as part of a post Adyar Theosophical Movement. With no lumbering bureaucratic elitist millstone round its neck Theosophy will be ready to take the world by storm and gain new students from a much broader public than Adyar ever considered.

Theosophy will soon have dispensed with having to support the international pyramid through which those with international ambitions can climb to power in order to attain membership of the exclusive and secretive elite, financed by the fees of the general membership to whom they give nothing in return. International groups of individual Theosophists may still exist within the Theosophical Movement but they will no longer carry their pernicious manipulative power and their attraction will be the study and promotion of Theosophy.

Newly independent national sections, unhindered by an international elite dedicated to keeping membership low in order to maintain their power, can now be masters in their own house and flourish without the constant deference to a hierarchy. National leaderships will no longer need or decide to act as gatekeepers between the international authority and the general membership. Concerns about the secrecy of the international ruling elite will become a thing of the past and the members will feel much more comfortable with their organisation.

Theosophy can be brought to everyone by groups directing their energy locally on their own initiative. Liberated from a restrictive and draining central authority, members at both national and lodge level will feel ownership of their groups and new approaches to the Theosophical teachings will emerge, which can be transmitted around the world for the benefit of the entire Theosophical Movement. All groups can feel that they have something to contribute to world Theosophy rather than see themselves as an outpost of an organisation that has ignored them for decades except when they collect their money.

Nobody owns Theosophy and new self generating independent groups, un-haunted by the confusion of the past and free of the bounds of obligation to preserve tradition and lineage, can bring refreshing approaches to Theosophy. Likewise former Adyar organisations can unload the baggage of the past at their pleasure and assert a personalised identity. Some former Adyar groups may maintain an identification with the Adyar lineage but this will be a decision of the members and by no means part of a pre-ordained template of tradition.

An organisation with a hereditary principle within its leadership will always tend to look backwards and resist the progressive forces within it. The break-up of such an organisation will always be inevitable and what we have seen, with the obsessive secrecy of the ruling elite, is simply the old order clinging to power and prestige. Theosophy has been chained up by the Adyar tradition for far too long and the world awaits its rebirth as a vibrant force on the world stage, as Theosophists empower themselves with its new energy.