Limited with the number of jobs she dished out to her family, turning

it into a family firm. The Society will need to recover control of

Adyar and restore it as the headquarters of a society of members. 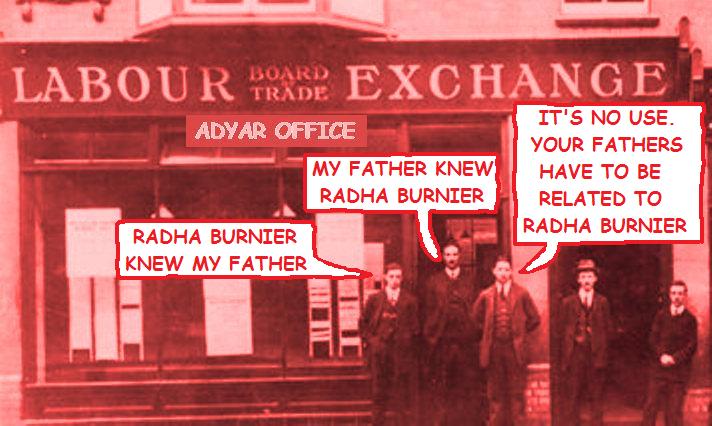 The Ballad of the Adyar Job Centre

I went to Adyar to look for work

They said “you’re not family” and went berserk

You won’t fit in to Radha’s Plan

Get yourself out of here and on your way

Radha’s the boss and we must obey

One secret well kept from the general membership is the extent to which Radha Burnier awarded jobs at the Adyar Headquarters to members of her own family. National leaderships have known about this for decades but preferred to creep to Radha Burnier rather than confront the issue. Members have never been informed about this abuse of power and it is Adyar Theosophical Society policy that members rarely get told anything. Most members would be horrified to hear that family connection rather than ability to do the job has been the criteria for many Adyar appointments.

Radha Burnier’s nepotism has continued a legacy of family control of Adyar which may last indefinitely and which effectively puts the Adyar Headquarters beyond member control. Confronting the issue of nepotism at Adyar is therefore long overdue so how about the Headquarters releasing a list of all members of the Radha Burnier’s family employed at Adyar, the posts they hold and how long they have held these posts. All paid up members are supporting the Society with their subscriptions and should have this information, which is currently kept secret and not for discussion. The precise nature of the situation can then be assessed and with the matter out in the open, it can be seen if the incoming international president can assert control over Adyar appointments. I am not advocating mass sackings but rather a policy of transition to non family appointments as posts become vacant. 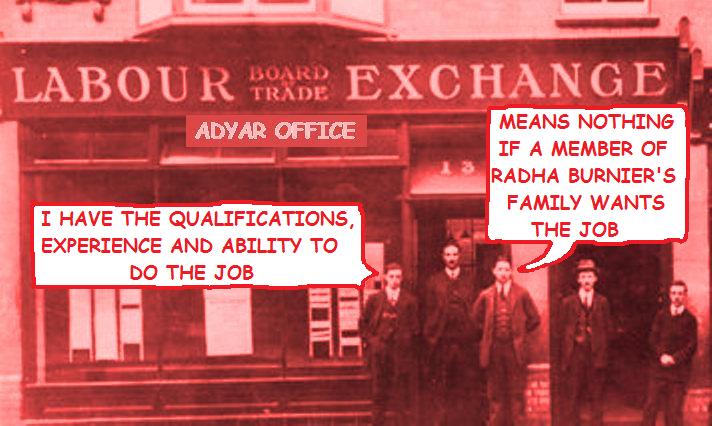 Although many organisations may have several members of the same family in their employment, the idea of a boss allocating jobs to family members is unacceptable in an organisation that is not primarily a family owned business. It must be said here that aside from a need to maintain a lineage with a succession plan, most modern family businesses cannot afford to put family connection above ability when making appointments. All businesses are acutely aware that a policy of appointing on a familial relationship basis rather than on actual merits and abilities, is a recipe for disaster. Family based appointments may also generate resentment amongst non-family employees which undermines the ability of a business to reach its full potential. It is clear however, from the extent of the nepotism, that Radha Burnier’s family have come to regard the Adyar Headquarters as their own family business and appointments have been made on the basis of family.