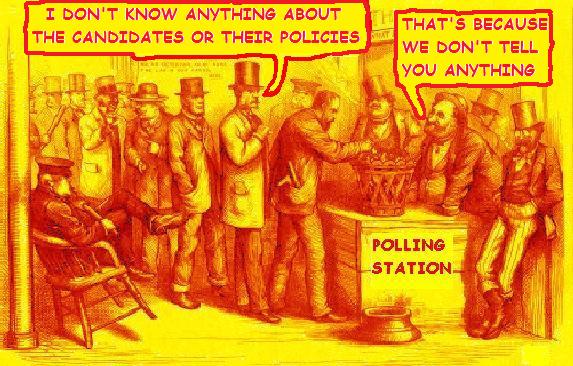 Will this still be the situation when the voters come to make their choice?

So we have two candidates for International President decided by the elite on January 11th. Some national sections have bothered to reveal the identity of these candidates to their members and others don’t consider this to be a priority. This follows the traditional Adyar Theosophical Society policy of keeping the members in the dark to keep them from asking awkward questions of the leadership. But even when the names are given, most members don’t actually know much or anything about them. In most modern organisations, the candidates would have contacted the members and local groups directly as soon as they were nominated but in the hierarchical Adyar Theosophical Society this would set the inconvenient (for the leadership) precedent of making leaders and officials accessible to the general membership.

The candidates should be out of the starting blocks and canvassing the voters with their manifestos and everyone in the Society with the internet should be hearing from them. Those members without internet access should receive policy information and general briefings via the lodges or their national sections. The Adyar Theosophical Society is different from modern societies of members in that it lacks a system by which the international leadership can contact the members directly and vice-versa. In fact it is likely that in many cases, policy information from the candidates will never reach many individual members and yet those members will be expected to make an informed decision. Surely in the modern era, members are entitled to be informed and to have direct communication with those for whom they are voting, and the Society stubbornly maintains a system that does not support this. It is reasonable to claim that any election conducted in these circumstances is invalid.

Of course there are elements within the Theosophical elite who believe that the members shouldn’t be allowed to vote because they don’t have the necessary information. Making sure that the members are kept out of the loop has been turned into an art form over many decades and this has been used to try to cheat the members out of their right to vote. There has been no clear statement by the General Council on guaranteeing the voting rights of members following the 2008 attempt to disenfranchise them and it cannot be certain that another underhand move to withdraw the vote from the membership will not be tried in 2014 as it was in 2008. The divisive “BALLAST” comment made about members at the 2013 Adyar Convention clearly indicates that the ruling elite are closing ranks to resist member influence within the Society. It seems that many in the Adyar Theosophical Society leadership dismiss the views of members as worthless and would prefer a government of “experts” elected by “experts” similar to that once advocated for Britain by Sir Oswald Mosley.

Here is a post election posting on this subject

The General Council has had information

about voting irregularities for months but has done nothing