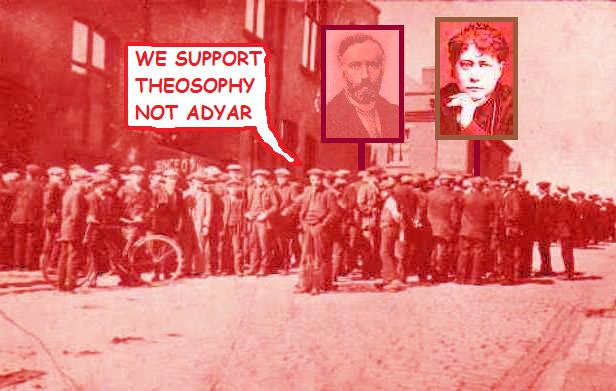 Come on you leaders and stop the decline

Or will you just sit there and say things are fine?

And Adyar will soon be to history consigned

Have you an answer to this state of affairs?

Or are you on the Titanic, rearranging the chairs?

With the president proudly wearing the crown

Until the news comes that Adyar's gone down

There are few left to mourn and few will shed tears

Most of us know it's been coming for years

So what of the future when Adyar's no more

Local initiative will pull Theosophy up off the floor

Members' energy directed to a group that they own

No ruling elite surrounding a throne

A chance for Theosophy to make massive gains

In a Theosophical movement free of its chains

The two presidential candidates have two options. The first is that they can do something to stop the Adyar Theosophical Society becoming extinct and the second is to stand there with the rest of the Theosophical elite while the Society disintegrates under them.

If they have strategies for saving the Society as a unified body then the members certainly did not hear anything about them during Radha Burnier’s 33 years of presiding over decline. So standing there and doing nothing about decline appears to be the order of the day and it is optimistic to think that this will change.

There are of course a shedload of other problems to be dealt with in the Adyar Theosophical Society but if the Society ceases to exist either through break-up or lack of members, then these won’t really matter.

But it’s not all doom and gloom. Adyar may be reformed but if it isn’t and the Society breaks up then a new re-energised Theosophical Movement, relieved of the millstone of Adyar round its neck, will take Theosophy forward in new and innovative ways. The removal of Theosophy from the control of the Adyar international elite, who have held it in a straight jacket of exclusivity for the last 80 years, will allow local groups to make Theosophy accessible to a wider and more diverse audience than ever before.