Revealing that the Adyar elite’s stately home is

under threat of compulsory land purchase and

can be saved by convincing the authorities that

it is in fact an international headquarters (if true)

may have given the Theosophical Society members

a brilliant opportunity to get Adyar off their backs. 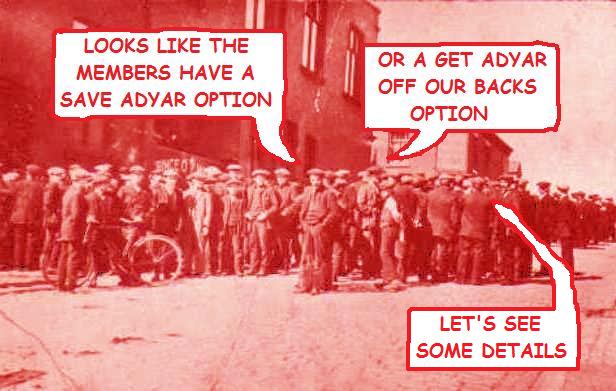 This posting is a follow up to a previous posting of Jan 29th 2014, entitled;

There appears to be a strong possibility that members may be blackmailed into voting for a Western presidential candidate because the Adyar Estate may be subject to the enforcement of a Compulsory Land Purchase Order if they elect an Indian candidate. Simply installing a Westerner as leader of the Theosophical Society to convince the authorities that Adyar is an international headquarters and thus deflect the Compulsory Land Purchase Order seems an unsafe strategy, and it is clear that the leadership has had many years to consider and implement better alternatives.

Evidence of a real threat has yet to be produced and the timing of the release of this information is suspicious and goes against the normal code of silence. In most international organisations, news of a threat such as this would have gone round the world like lightening rather than be being leaked out years later at an apparently convenient time.

Any threat has clearly been around for some years and it is possible that Radha Burnier used her Swiss citizenship to make Adyar appear international and conceal its true status as her family’s stately home. If this was the case then the General Council would have known about this scam and that it was a stop gap measure but preferred not to address the situation. This would be another example of creeping to Radha Burnier rather than participating in the running of their own organisation. Even if Radha did not utilise her Swiss citizenship then the General Council must have been aware of the purchase threat and have put saving Radha’s house for the family above the interests of Theosophy and the Society.

There may be conservation issues and concerns regarding the future of wildlife on the Adyar Estate but the authorities’ plans after the compulsory purchase may not actually threaten the wildlife and India does have environmental safeguards. Any threat to wildlife on the Estate could and should have been communicated to members worldwide immediately the threat emerged. It is reasonable to assume that detailed plans for the Adyar site are already in the public domain and that these were prepared prior to the issue of the purchase order. The leadership should already have seen copies of these plans and can make the membership fully aware of their details. If there is a real threat of compulsory purchase then this may be a unique opportunity for the Theosophical Society members to get Adyar off their backs.

If it is clear that the Adyar Estate may be purchased by the government and retaining it may lead to prolonged and expensive legal action then the Society may decide to settle with the authorities and let it go rather than retain, what is in reality, a stately home. A referendum of members on keeping Adyar could be held but it would have to be accompanied by a commitment to address the issue of family control. The referendum could even be extended to the question of needing an international headquarters at all, as the Society hasn’t effectively had an international headquarters for decades even though it has been paying for one.